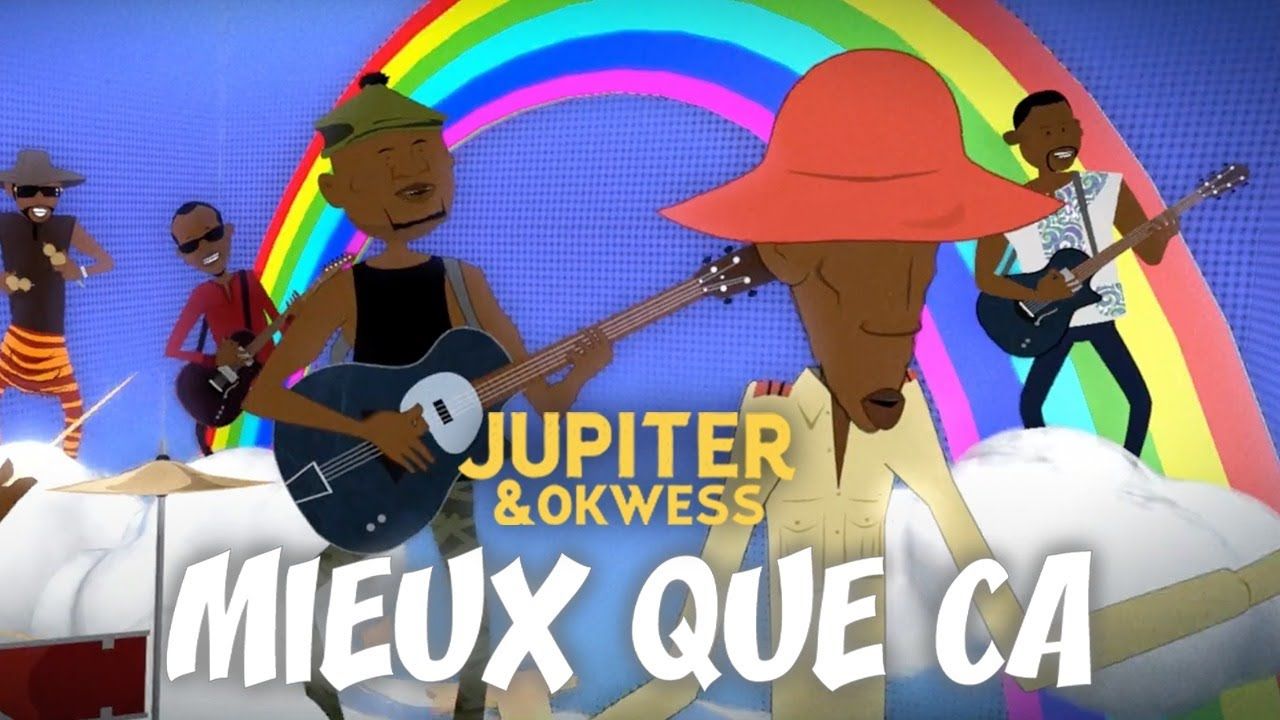 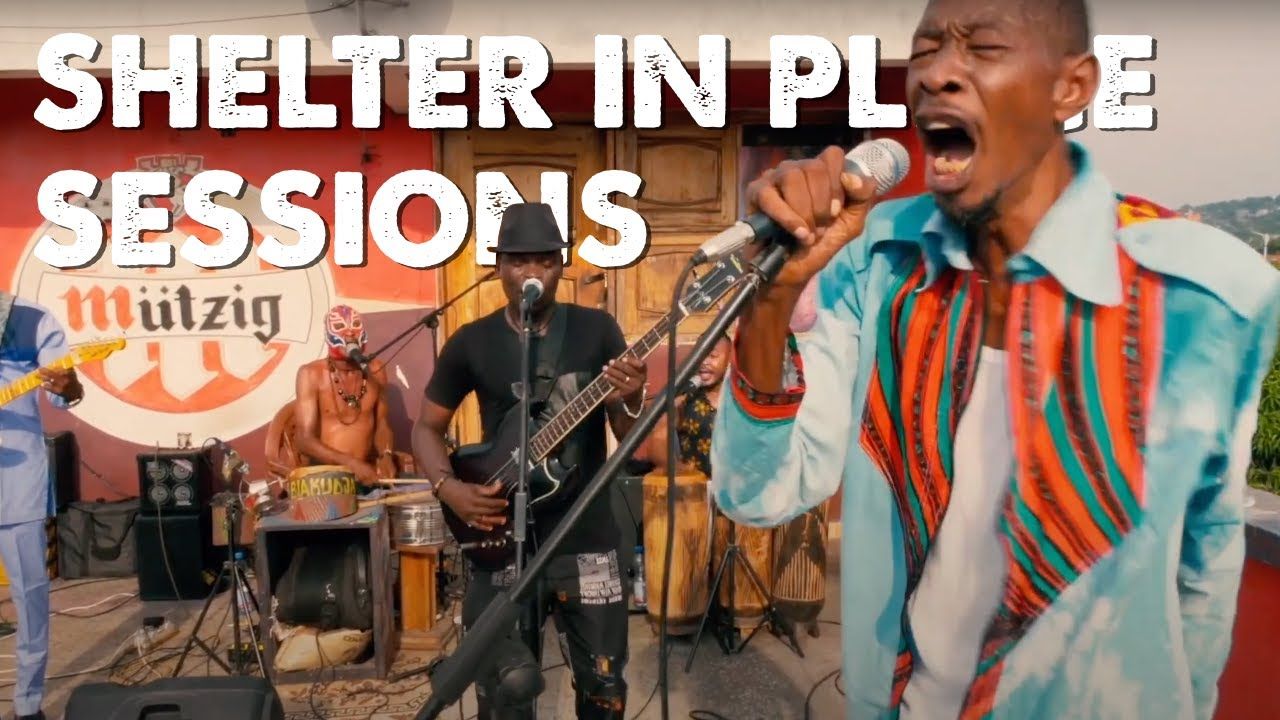 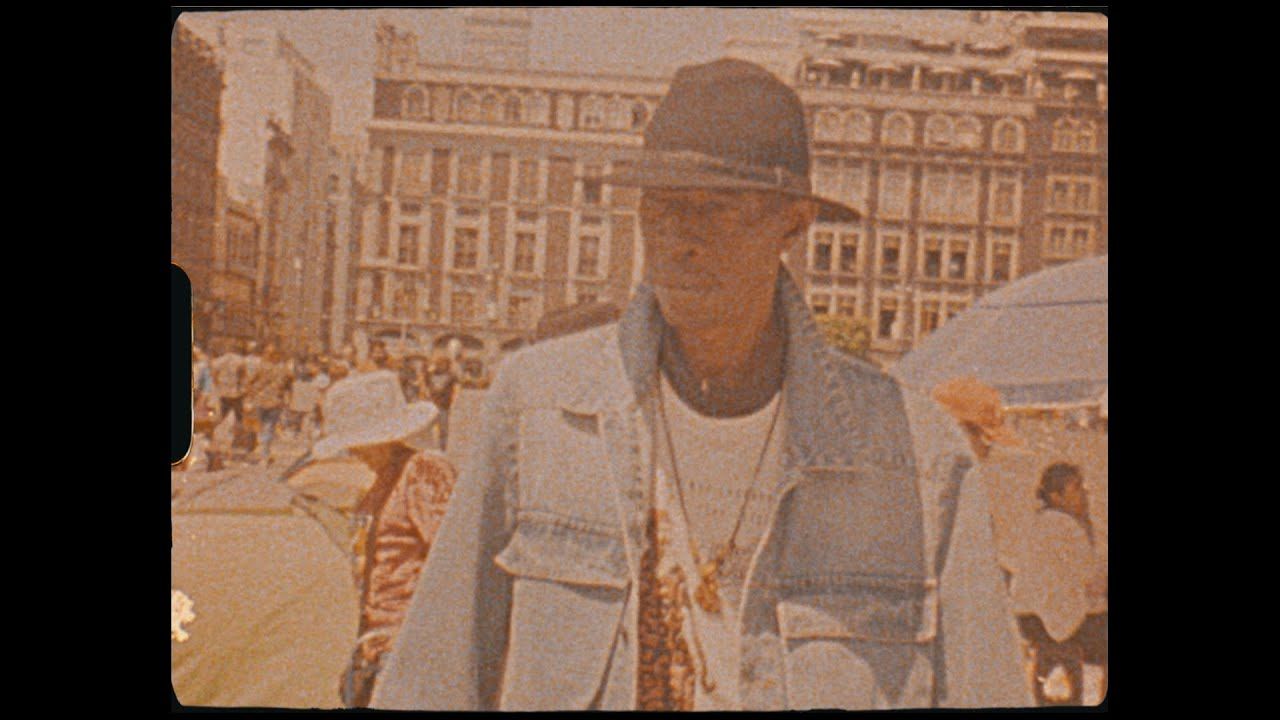 Na Kozonga: I’m going home. That’s Jupiter’s wish, and the title of his third album. Since the release of Hotel Univers and Kin Sonic, ‘the Rebel General’ and his band Okwess have been around the globe, making their sound heard in its four corners – the rockiest sound ever to emerge from the Congo. That vast country, scandalously wealthy in geological and musical terms, possesses an inexhaustible reservoir of rhythms and sounds that Jupiter and Okwess draw from to generate energy for the feet, and nourishment (‘okwess’) for the soul. All under the energetic direction of a band leader whose elongated silhouette and allusive speech are enough to make the sculptures of Giacometti pallid with envy. Well, what do you know: this fantastic troupe have only one desire, to go back to the Congo. Because it’s in Kinshasa that Jupiter found his inspiration and experienced his moment of revelation when he was still young.

Let’s take ourselves back to the end of the 1970s. Jupiter has just returned from a long spell in East Berlin where his father was a diplomat. There, already playing fast and loose with frontiers, he crosses the famous wall, morning and evening, to go to school in West Berlin. He loves listening to James Brown and The Jackson Five; or even, when his father turns up the volume, the hits of Claude François. Eclecticism has never scared him. It’s on the eastern side the Iron Curtain that he forms his first band: die Neger (‘The Niggers’). ‘Neger’ is one of the first German words he learns, thanks to the all the people who point their fingers at him as he passes them on the street. His own ‘niggers’ are recruited from among the children of other diplomats - Belgian, Cambodian, Gabonese, Spanish - and they play for fun on self-made instruments. One thing he already knows for sure: the world belongs to everyone, and from that rock-solid belief comes the song ‘The World is My Land’, which appears on his first album, almost thirty years later. But let’s not get ahead of ourselves.

At the age of 17, Jupiter goes back to Kinshasa. In that sound-saturated steam bath of a city, he’s captivated by the myriad traditional music styles of a capital in which all the ethnicities of the Congo are represented (‘No less that 450’, he remembers). It’s a treasure trove that the stars of Congolese pop aren’t paying much attention to, devoting themselves instead to the dominant rhythms of Congolese rhumba. But in those other hidden rhythms, imported into the city from distant villages, Jupiter finds a strange affinity with the western music styles he’s been discovering in Germany, but in their raw state, as if rock, soul, funk, all came from the same root, the same source: the Congo.

His grandmother, a healer who carried him on her back during ceremonies when he was a child, bequeaths him a drum: he starts playing it assiduously, performing at various funeral gatherings to which, in Africa, music is always the first ‘guest’ to be invited. Then he forms his first bands, and slowly but surely, forges his own singular identity – a unique sound, different to everything else emerging from a country where the kings of rumba crush all competition under their feet. It takes time to impose that sound, but Jupiter believes in it with an iron conviction. And then he meets French filmmakers Florent de la Tullaye and Renaud Barret, who devote a full-length documentary, entitled Jupiter’s Dance, to our man in Kinshasa.

Sometime later, Jupiter’s long silhouette can be seen pacing the stages of France for the first time and, under the direction of the late Marc-Antoine Moreau, he releases his first album. His star begins to shine, bright enough for Damon Albarn, the brains and inspiration behind Blur and Gorillaz, to invite him to guest on his album Kinshasa One Two, and then pile him on board the Africa Express train tour that criss-crosses the UK in 2012. Soon afterwards, Jupiter and Okwess are doing support slots with Blur. From England to Mexico via Japan, New Zealand and France, their explosive shows leave a powder trail of memories and they haven’t stopped zigzagging across the world at a dizzying rate since then.

This new album is the fruit of all those journeys. It’s branded by them. On it we find the fabulous Preservation Hall Jazz Band horn section, whom Jupiter and Okwess met during a jam session on the fringes of the New Orleans Jazz Festival, guesting on the song ‘Abalegele Gale’; we find the pioneer of Brazilian rap Marcelo D2 and the American singer Maiya Sykes, whose soulful vocals are on a par with those of Alicia Keys. So many encounters that steer Na Kozonga toward American shores, where the dark story of slavery gave birth to luminous music. Judging by the delirious reception his concerts have received from Mexico to Brazil via Colombia, Jupiter has been well-nigh adopted by Latin America. And it was in the most ‘Latin’ city of the USA that Na Kozonga was recorded, at the studios of Mario Caldato, a producer more used to working on hip-hop blueprints, but one who knows – like a good Brazilian – how to juggle sophisticated rhythms and respect the energy of Okwess, an energy that all those years of gigging have transformed into something incandescent.

Co-producer François Gouverneur was careful to safeguard that balance in a sound mix that carries just as many positive words (‘We can do better than that’), as reflections on the complexes that emerged from colonialization (‘You Sold Me a Dream’ with the militant Chilean singer Ana Tijoux) and fables from the urban jungle (‘Jim Kata’) or the forest itself (Izabella). From this furious profusion of sound and rhythm, with its exploding guitars, more gentle moments detach themselves, in which Jupiter’s voice becomes intimate, consoling, as it laments dear departed friends (‘Marco’, an homage to Jupiter’s manager Marc-Antoine Moreau, who died in 2017), or delivers a slow samba (‘Sava Sarava’ together with the carioca Rogê) that becomes marvellously entwined with the delicate choruses of Congolese rumba. Receptive to every wind, every journey, and to the musicians from Okwess who have written and composed some of the songs, Na Kozonga definitely bears all the marks of Jupiter and his best (‘my digital fingerprint,’ as he likes to call it). To those who fear that identity might get lost when things get mixed and mashed, he proves that the opposite is true. No surprise really, when you’re at home wherever you are.

As for the song that gave its name to the album, there’s a chorus in there that no doubt reminds you of something. It was one of the tunes that Jupiter used to listen to Germany, on a Boney M record. In fact, it’s German in origin (‘Night Train’ by Hallo Bimmelbahn), but we see it blossoming here in new Congolese garb.